The Path of True Freedom

False beliefs and notions always limit our infinite capacity and potential. Even though every human child is born with infinite possibilities, s/he gradually becomes caged by the false beliefs and ideas prevalent in his familiar, social and national surroundings. He thinks what his environment teaches him to think and does what it tells him to do. The human child who could have been a ground breaking scientist, a fearless explorer, a selfless hero, an immortal author, a great leader or a liberating sage instead turns into a failed, frustrated, passive coward, trapped by false beliefs and notions. The reason for his failure is neither lack of talent or ability nor physical limitations, but mental bondage.

Every child is a potential superman. But the mental cage created by status quo gradually turns him into a weak and helpless being. The life of a circus elephant is a vivid example of the power of mental bondage.

Every child is a potential superman. But the mental cage created by status quo gradually turns him into a weak and helpless being. The life of a circus elephant is a vivid example of the power of mental bondage.

The lively elephant cub is captured from the jungle and tied to a strong wooden deck with a six foot long iron chain. In the beginning, the elephant cub relentlessly tries to break the chain. Soon however, the chains prove to be too strong for the petite bodied animal. Blood gushes forth the cub’s legs. Surrendering to the captivity of this six-foot radius circle becomes the only option. This is how false beliefs and notions develop in the cub. He starts to believe he will never be free of this confinement, this cage. Such is his destiny.

Even after the captive cub grows into a fully grown elephant, he still considers the six foot radius circle as his destiny – even if he is tied to a little post of wood or bamboo. Whenever he feels any pressure on the chain, he goes further into the circle. His false beliefs tell him he cannot go beyond. There have even been instances when the circus caught fire and yet the elephant did not try to escape. He simply burnt to death standing on the same spot. Even when he can uproot the little wooden stick with a mere shrug of his mighty body, he considers the six–foot circle his destiny. His cage is not made of iron or wood. His cage is in his mind.

We are in the same situation. Even though every human being, every family, every nation has immense possibilities, talents and abilities, we are limited by the cage of false beliefs and notions created by oppressors. We are accepting a wretched and miserable existence as our fate. Like the circus elephant, we are not trying to break free even when we are burning to death. But if we can shrug off these false belief and notions, we will see that all off us carry immense possibilities within us. True freedom lies in breaking free of the false beliefs and notions and attaining true faith. True faith is the foundation of all successes, all achievements. It is faith that cures illnesses, transforms failure into success and restlessness into peace. Faith develops talents, utilizes abilities, and creates skills. It is faith that removes scarcity and creates prosperity.

Humanitarian uprising starts from true faith. A person with true faith realizes he is God’s best creation. He understands his immense power and possibilities. He gathers the strength to free his priceless human self from the chains of lust, greed, fear, cowardliness and other animal instincts. He breaks free of the monotonous boredom of day-to-day life. True faith enables us to be truly engaged in every work. When one is completely engaged, every little task becomes a source of boundless joy.

Through out the ages the chores of every day life were a monotonous annoyance to thoughtful people. The reflective ones have always sought to escape this tiresome monotony. A disciple told his Guru, I want relief from the monotony of having meals, taking baths, putting on clothes, running the household, and praying.

The Guru told him to, ‘Have your meal, take a bath, put on your clothes, do the household chores, and pray.’

A few days later, the disciple came to the Guru with the same plea.

The Guru’s reply was the same.

It took the disciple twelve years to grasp the real meaning of his Guru’s reply. Twelve years later, he understood that we find these chores monotonous because we just repeat them like machines. As our mind dwells in the past or the future most of the time, we fail to enjoy the present in its wholeness. The present becomes monotonous. If we can be truly involved in all the activities of everyday life, immerse ourselves in them, give them our complete attention, only then can we relieve ourselves from the monotony of machine like imitation. Every task then becomes a source of joy. Every nibble, every bath, every attire, every conversation with our spouse, every little task and responsibility becomes a new world, a new life, and a new horizon of joy. Every prayer will bring forth ecstasy. Every desire will turn into reality and every prayer, a union with God.

The way to break free of false beliefs and notions is meditation. Meditation is also the way to transform the monotony of everyday activities into pure joy. Meditation brings our mind to the present. It frees us from the weariness of past failures and the anxiety about future ones, and adds new dimensions to every moment. It helps the mind grasp the hidden meaning in everything around us. Things that are apparently ordinary become extraordinary because we see them in a new light. Meditation helps us immerse deep into our own beings. It enlightens our inner world with new knowledge and realizations. It is through meditation that we can connect to our true inner selves, with the field of pure potentiality within us. The discovery of our true selves and potential gives us true faith, frees us from all chains, and transforms everyday boredom into joy.

It is through meditation we transcend the limitations of our physical existence. We become super human. We taste total freedom for the first time in our lives. 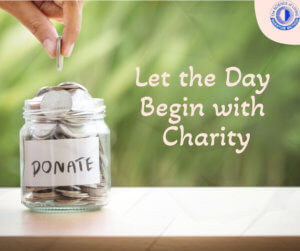